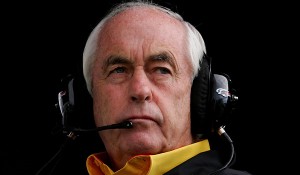 While drivers and crews ponder the ‘new’ track and strategies, one of the hottest stories in the sport is being played out behind closed doors: The Roger Penske-Jack Roush dealing for 2013 is still being kept well hidden by both sides. Penske, after 10 years with Dodge, is switching to Fords at the end of the season, and what Penske will do for engines has been a big question in the NASCAR garage.

Neither man has said much about how their talks have gone. Roush has said he’s willing to sell engines to Penske. But then Penske has his own engine operation, 80-men strong. The sense has been that Penske and Roush will likely be more competitors in 2013 than tight Ford teammates. And following that, it would seem unlikely that Penske would be willing to or interested in buying engines from such a powerful competitor. Now, however there is increasing speculation in the stock car garage about the Penske-Roush situation, and it goes like this:
— Penske would indeed buy his Ford engines in 2013 from Roush-Yates;
— that would allow Penske to sell his own in-house/in-Charlotte stock car engine operation to Dodge, to allow Dodge to attract a top operation to run its cars next season;
— the kicker could be that Penske might want to buy a major share of the entire Roush-Yates engine operation.(MikeMulhern.net)(6-9-2012)