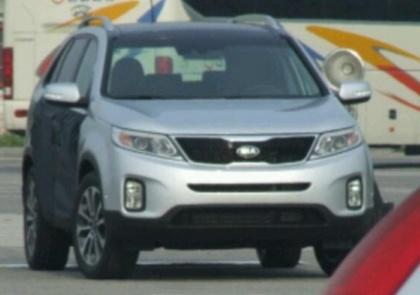 The forth-coming 2014 Kia Sorento CUV has been spotted wearing almost no camouflage!

Thanks to our fellow Korean Kia enthusiasts, we have gotten our hands on a fresh new spy shot showcasing the upcoming 2014 Kia Sorento facelift. Caught for the very-first time almost completely undisguised, the 2014 Sorento facelift is expected to hit the Kia showrooms in South Korea in the third quarter of the year.

In addition to the revised set of alloy-wheels and slightly updated side mirrors with turn signal, the refreshed Kia Sorento facelift is also expected to receive a restyled rear-end with subtle styling tweaks made to the tail-lights and bumper.

What latest spy shot doesn’t reveal are several changes that will take place inside the cabin and under its hood. The interior will receive a plethora of minor styling tweaks and higher grade materials, while the engine line-up is rumored to get a new 4-cylinder turbo engine from the just-recently launched 2013 Hyundai Santa Fe

Can you believe these are the most stolen SUV’s?

Camry #1 Best-Selling Car in November, Sonata beats out Accord!