NASCAR and breakdancing are two activities that go hand in hand. It’s hard to think of one without thinking of the other. Ever since King Richard Petty celebrated his fifth championship with a one minute head spin, the two activities have been joined at the hip.

Okay, none of that is true. In fact, I reckon this is the first time break dancing and NASCAR have ever been connected, but that is just the kind of pioneering attitude Jeff Gordon has brought to the sport since he entered as a brash California youngster switching to NASCAR from open wheeled racing.

This surreal scene happened in NASCAR’s Champion’s Week festivities in Las Vegas. The festivities are a time for the drivers to kick back, relax and celebrate a long season.

It is apparent early in this video that they all appear to be enjoying themselves. Well, maybe everyone except Gordon. He was a little reluctant to flash his moves after being put on the spot.

After a little prodding, Gordon rose to the dance floor. There was one problem: the DJ started playing Footloose. You can’t breakdance to Footloose!

Gordon let everyone know he needed something with a little more beat. Then with the opening of P Diddy’s Come with Me Gordon took to the floor.

If he has, it hasn’t been at fellow racer Denny Hamlin’s Charlotte area club. Hamlin told Gordon after the dance, “don’t bring that [garbage] into my club.”

Hamlin’s critique aside, it is nice to see these guys having fun and getting jiggy with it. 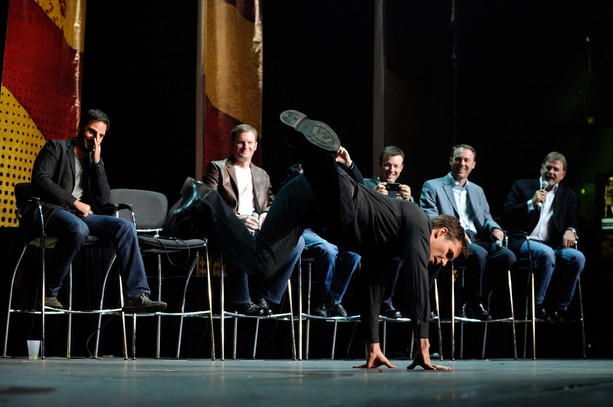 submitted by Paul Wells.  Paul Wells is managing editor of TheRoadPro.com.  Wells formerly was Vice President of Murphy Oil USA based in El Dorado, AR and is a graduate of Harvard Business School.