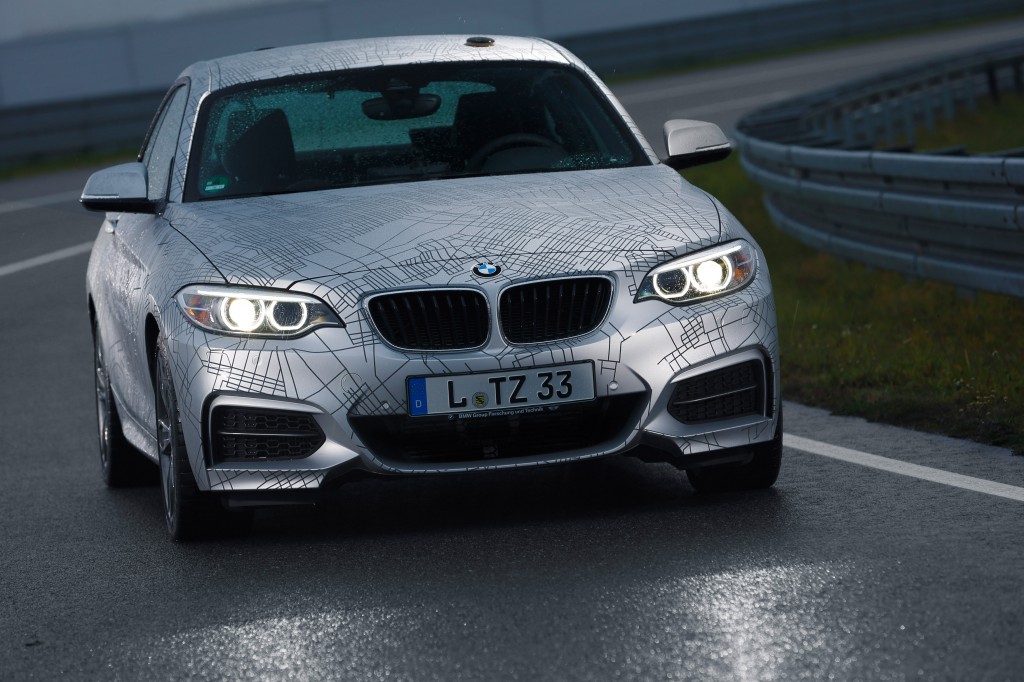 Wow.  Watch the BMW M235i that BMW brought to the Consumer Electronics Show – it’s a 2 Series that can drift itself.

Yes, this is a machine that will happily apply a generous helping of opposite lock for you. The system uses GPS tech that wouldn’t be out of place in guided missiles, as well as advanced sonar to monitor its surroundings, according to a report by Autoweek.

Take a look below for a video of the autonomous BMW M235i drift and get its sideways on.

The BMW Group uses its ConnectedDrive banner to group together unique and innovative functions which link the driver, vehicle and outside world intelligently with one another. These functions enhance comfort, allow customers to experience a new dimension in infotainment and significantly improve the safety of BMW Group vehicles. To this end, BMW ActiveAssist – the package of partially and highly automated driving technology developed by BMW – will make a significant contribution to bringing the vision of safe and accident-free mobility another step closer to reality. The BMW Group has been conducting research into the various expressions of this idea for many years with this goal in mind. BMW ActiveAssist, as part of BMW ConnectedDrive, pools all the technological developments in this area.

The BMW Group is using the Consumer Electronics Show (CES) 2014 in Las Vegas to present a new element of BMW ActiveAssist: a safety assistance system which brings the vehicle back into line in demanding driving situations without any input from the driver.

Precise and reliable vehicle control at the dynamic limit is a central building block in the development of highly automated driving. Only a system that can safely master all dynamic situations up to the vehicle’s dynamic limit will be able to generate trust and provide sustained and secure relief for the driver in tiring situations. The experts at BMW Group Research and Technology have built a research prototype with perfected control technology in pursuit of this goal. The prototype can pilot its way at high speeds and with exceptional precision on a slalom run between cones, adheres to a marked out circular course regardless of the friction coefficient of the road surface, and executes an obstacle-evading lane change to perfection. It makes optimum use of the potential of both engine and chassis. Even when deliberately provoked into oversteer – the clearest way of highlighting a vehicle’s dynamic limit – the highly automated prototype follows its path safely and along almost identical lines time after time.

While the control systems fitted to today’s vehicles restore stability by braking individual wheels, this new function introduces active and precisely calculated steering inputs into the mix. The research prototype reacts to fluctuating grip levels – the kind experienced in sudden hydroplaning – with the precision of an expert driver. The car continues along the predetermined target line, but does not attempt to maintain a preset speed under all circumstances. Instead, it constantly factors in the condition of the road surface and responds intelligently as required. The sensors delivering the necessary information are the same as those fitted as standard on today’s vehicles and also send data to the DSC system, for example. Understeer – where the car turns less than the driver intended – is dialled out by opening the steering. And a sliding rear end (oversteer) is caught using a carefully gauged combination of countersteering and brake inputs. The programmable electronic steering required to make this possible carries out carefully targeted, rapid and flawless adjustments, and is fitted as standard on all current BMW cars. The prototype illustrates the BMW Group’s aspiration to offer its customers a highly automated driving experience exuding emotional appeal – even at the car’s dynamic limit.

Many years of experience in vehicle automation.
With BMW ActiveAssist, the BMW Group is once again leading the way worldwide in the implementation of safety-enhancing and highly automated systems. Back in October 2009 the BMW Group rolled out its BMW Track Trainer research project to showcase highly automated driving on the ideal line around the Nürburgring-Nordschleife, the world’s most demanding race track. Developed by engineers at BMW Group Research and Technology, the BMW Track Trainer later demonstrated its effectiveness on the Laguna Seca, Zandvoort, Valencia, Hockenheimring and Lausitzring circuits. Here the research engineers collected important practical experience regarding vehicle control and position location in extreme conditions. The BMW Emergency Stop Assistant research project added further important insights to the knowledge pool. If the driver is incapacitated – e.g. by a medical emergency such as a heart attack – this function can switch the vehicle into highly automated driving mode, steer it safely to the side of the road and automatically activate an emergency call.

These developments paved the way in 2011 for a test vehicle to drive on a multilane highway in highly automated mode. The research prototype covered 65 kilometres (40 miles) between Munich and Nuremberg, accelerating, braking and overtaking other cars along the way without any driver intervention. It did so while observing the traffic laws at all times and kept pace with the traffic at speeds of up to 130 km/h (81 mph). The prototype has since covered approximately 15,000 kilometres (9,300 miles), over which the development engineers have gained important insights into the behaviour and response strategies of their highly automated vehicles.

The starting point for the development of this driving strategy is the secure location of the vehicle within its lane and, above all, the reliable recognition of all vehicles and objects in the immediate vicinity. A key role is played by the fusion of data from various mutually complementary sensor technologies – such as lidar, radar, ultrasound and camera detection – fitted on all the test vehicles. Despite this 360° detection capability, there is little on the outside to tell the vehicle apart from a series-produced model.
The next step in the development of highly automated driving functions came in June 2013. The research vehicles not only made highly automated progress along the highway, they also completed complex changeovers from one highway to another at intersections fully automatically.

Highly automated driving in a 2015 fleet trial.
Since February 2013 the BMW Group and international automotive supplier Continental have been working together to take the next concrete steps towards the implementation of highly automated driving functions. This research partnership will run until the end of 2014 and involve the introduction of several test vehicles with close-to-production technology. The BMW Group’s next major goal as part of this cooperation is to introduce highly automated driving on European highways and tackle the challenges that this will bring – such as crossing national borders and negotiating road construction.

BMW conducted fleet trials as part of its research activities into electric mobility, collecting valuable experience with the MINI E and BMW ActiveE. These trials produced important pointers for the ongoing development of electric mobility, and the new BMW i3 is the first model to benefit from these findings. This successful testing principle will also underpin a fleet trial for highly automated driving in 2015, which will see the BMW Group once again assume a leading role in the development of highly automated driving functions. By 2020, the technical foundations should be in place for a highway-based system that will allow highly automated driving in series-produced vehicles.