Next year, Volvo will offer customers the option to ditch the traditional key or even the modern electronic fob in favor of using a smartphone app to control their vehicle. The device’s Bluetooth connection will allow the engine to start, let owners toggle the locks, and more. The Swedish automaker will show the innovative tech publicly at the Mobile World Congress 2016 in Barcelona, Spain, later in February.

Volvo sees the functions of a traditional key as just the beginning for this smartphone tech. Through the app, an owner will be able to share access to the vehicle with family or friends. Companies, like rental car agencies, will also be able to give customers permission to use a model, and a person won’t have to worry about picking up a key.

Volvo will give the digital key a major test later this year on its car sharing fleet in Gothenburg, Sweden. In 2017, the company will make the tech available to customers on a “limited number” of vehicles – the video shows the S90, V90, and XC90. We’re curious to see how the automaker handles security concerns because thieves have already cracked some modern key fobs.

If you’re already having an anxiety attack at the mere thought of a dropped phone or dead battery leaving you stranded, don’t worry. Volvo promises to continue to offer physical keys to its customers. 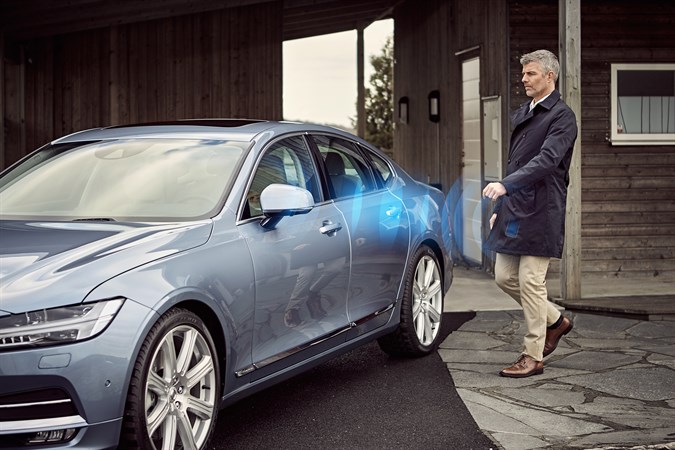 For decades, drivers have been accustomed to accessing and driving cars with physical keys. But no longer. In a ground-breaking move for the automotive industry, Volvo Cars plans to become the world’s first car manufacturer to offer cars without keys from 2017.

Volvo customers will be offered an application for their mobile phones to replace the physical key with a digital key. The innovative Bluetooth-enabled digital key technology, will offer Volvo customers far more flexibility, enabling them to benefit from entirely new ways to use and share cars.

The new Volvo app enables the digital key on the customer’s mobile phone to do everything a physical key currently does, such as locking or unlocking the doors or the boot and allowing the engine to be started.

This new technology will also offer customers the possibility to receive more than one digital key on their app allowing them to access different Volvo cars in different locations – according to their changing mobility needs.

Using the app people could potentially book and pay for a rental car anywhere in the world and have the digital car key delivered to their phone immediately. On arrival a customer could simply locate the rental car via GPS, unlock it and drive away, avoiding those frustrating queues at airport or train station car rental desks.

Volvo Cars’ digital key means that sharing a car will become both simple and convenient. Volvo owners will be able to send their digital key to other people via their mobile phones so that they can also use the car, this may be family members, friends or co-workers in a company.

“At Volvo we are not interested in technology for the sake of technology. New technology has to make our customers’ lives easier and save them time. Mobility needs are evolving and so are our customers’ expectation to access cars in an uncomplicated way,” said Henrik Green, Vice President Product Strategy & Vehicle Line Management at Volvo Cars. “Our innovative digital key technology has the potential to completely change how a Volvo can be accessed and shared. Instead of sitting idle in a parking lot the entire day, cars could be used more often and efficiently by whoever the owner wishes.”

Volvo will pilot this technology in spring 2016 via its car sharing firm Sunfleet, stationed at Gothenburg airport, Sweden. A limited number of commercially available cars will be equipped with the new digital key technology in 2017.

“There are obviously many permutations when it comes to how this shared key technology can be used,” added Martin Rosenqvist, New Car Director, Special Products at Volvo Cars. “We look forward to seeing how else this technology might be used in the future and we welcome any and all ideas.”

Volvo is a pioneer with new digital key solutions. In 2015 the Swedish premium carmaker launched the world’s first commercial offer to have online shopping delivered directly to the car, by providing a one-time digital key to a delivery company. Now the digital key technology will also be made available for customers.

Physical keys will continue to be offered for people who want them.

Volvo’s innovative keyless car technology will be shown for the first time at the Mobile World Congress 2016 (22-25 February) in Barcelona at the Ericsson booth.

About Volvo Car Group
Volvo has been in operation since 1927. Today, Volvo Cars is one of the most well-known and respected car brands in the world with sales of 503,127 in 2015 in about 100 countries. Volvo Cars has been under the ownership of the Zhejiang Geely Holding (Geely Holding) of China since 2010. It formed part of the Swedish Volvo Group until 1999, when the company was bought by Ford Motor Company of the US. In 2010, Volvo Cars was acquired by Geely Holding.