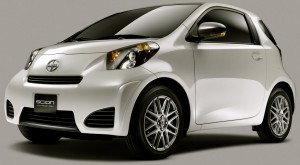 Billed as the “world’s smallest four-seater,” Toyota’s Scion iQ is a little more than a foot longer than the Smart ForTwo, but it is as wide as some compacts to make it feel more substantial on the road. The iQ is about 10 feet long.

Scion chief Jack Hollis commented that it looks a lot like the Smart, which doesn’t sell well, so we don’t have high sales expectations for the iQ. The micro’s price, which is higher than some subcompacts, won’t help: $15,995 plus delivery.

The iQ has a peppy 1.3-liter, 96-horsepower engine good for a top speed of 100 miles an hour. In contrast to the Smart, the iQ has a smooth, quiet, continuously variable transmission. Behind the wheel, the car feels as normal as any other small Toyota.

EPA fuel economy ratings are a mixed bag.  Good for around town at 36 mpg.  Not so great on the highway at 37 mpg….not that you would want to take this on a long road trip with four kids in the back.  There are MANY other small car choices out there that are larger that provide at least 40 mpg such as the Chevy Cruze and Hyundai Elantra.