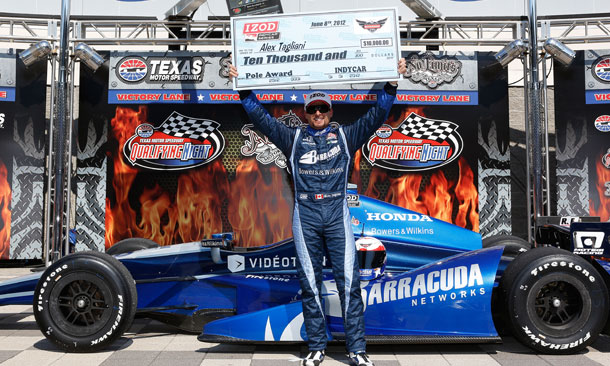 FORT WORTH, Texas — There’s been an emphasis on placing the car back in the drivers’ hands with the aerodynamic makeup of the new Dallara for the Firestone 550 on the 1.5-mile, high-banked Texas Motor Speedway oval.

“I told people after we sat out the race in Brazil that our season started in Indy and it did, with Honda power,” said Tagliani, who recorded the eighth pole of his career and first of the season. “It is an honor to be part of the Honda family and I am so happy to win this pole for the team and for Honda. We are very happy to start up front and I’d like to think that we will be a threat in the race.”

It was the first IZOD IndyCar Series pole for Bryan Herta Autosport.

“Alex and (engineer) Todd (Malloy) are a great combination,” said Herta, who competed at the track last decade. “They proved that here last year, and they proved it again today. They’re doing a really good job right now and it’s a very proud time for our team to have this kind of success. The next stage for us now is that we have to convert the qualifying pace we’ve had the last couple of weeks into results.”

INDYCAR released aero package regulations last week for the first (only) 1.5-mile event of the season, and downforce options were tweaked following a meeting with drivers at Belle Isle last week. Upon driver recommendations before the first practice at Texas, INDYCAR promptly released a bulletin to alter a rear wing regulation.

Then, seeing the results and listening to feedback at the conclusion of that session, drivers and INDYCAR vice president of technology Will Phillips met again after qualifying. Another bulletin (rear-wing wicker of one-eighth-inch and full span may be used — equal to about 125 pounds of downforce) was issued to be used in the evening practice and the race.

“We came in with various options and we’ve worked with the drivers to find that balance,” Phillips said. “It’s a good compromise to put on a good and safe show.”

Running side by side, passing and speed — hallmarks of the IZOD IndyCar Series racing at Texas — will continue, but the large packs of cars should be eliminated, which competitors and the sanctioning body sought.

“It’s definitely the most, the hardest qualifying that I’ve done here with that level of downforce and that level of grip,” Franchitti said. “And that’s what we want, that’s what all the drivers have been talking about with the series and putting some of the control back in the drivers’ hands, and we definitely felt we had that in qualifying and I really think we’re going to have that in the race.”

Mike Conway qualified eighth in the No. 14 ABC Supply car for A.J. Foyt Racing but will incur a 10-grid spot penalty for an unapproved engine change following the Belle Isle race (it didn’t reach it’s 1,850 mileage limit). His spot on Row 4 will be taken by Marco Andretti in the No. 26 Team RC Cola car.

Takuma Sato posted his highest qualifying position of the season (10th), but the driver of the No. 15 Rahal Letterman Lanigan Racing car will receive a 10-grid spot penalty for an unapproved engine change after an issue in the final practice. Rookie Simon Pagenaud in the No. 77 Schmidt Hamilton HP Motorsports car will start ninth and Ryan Briscoe will start 10th.

Also facing 10-grid spot penalties are Josef Newgarden, who did not make a qualifying attempt, and Simona de Silvestro.

Dixon was quickest in the final practice with a best lap of 216.139 mph.