You will find the full press release from Dodge below.  Here are the highlights…the Dodge Dart will replace the Dodge Caliber in the line-up.  The Dart will be using Alfa Romeo underpinnings from their Giulietta platform.

Power will comes from a choice of three engines: a “Tigershark” 16-valve 2.0-liter engine, a 16-valve 1.4-liter MultiAir Turbo engine (similar to what’s found in the Fiat 500), and the “Tigershark” 2.4-liter MultiAir four-cylinder. There will be three transmission choices as well (some combination of manual and automatic).

Chrysler also says the new Dart will be built in the company’s Belvidere Assembly Plant in Belvidere, Illinois.

Chrysler is trickling images out a little at a time.  We should have some interior shots next week.  Chrysler will have a live reveal at the Detroit Auto Show on January 09, 2012.

2013 DODGE DART
Dodge redefines performance in the compact car segment with an all-new,

With Alfa Romeo DNA and Dodge’s passion for performance at its core, the all-new 2013 Dodge Dart is a thoroughly modern vehicle that’s fuel-efficient, beautifully designed and crafted, agile and brings fun back to driving in the segment.

Similar to the Dodge Dart of the late 1960’s, the 2013 Dart offers a special blend of style, performance and innovation. The Dodge brand leveraged its nearly 100-year history of passion for building high-quality, innovative vehicles that stand apart in performance and style, as well as from its partner Fiat’s global compact car expertise, to develop the all-new Dodge Dart. 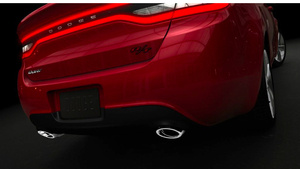 ALFA ROMEO DNA
The all-new Dart is the first Chrysler Group vehicle based upon a Fiat architecture – adapted from the award-winning Alfa Romeo Giulietta. The Giulietta is renowned for satisfying the most demanding customers in terms of road-holding, agility and safety, with exceptional driving dynamics. The Dart leverages all of these attributes within a lengthened and widened platform delivering segment-leading levels of interior roominess.

The all-new Compact U.S. Wide (CUSW) architecture underpinning the Dart is a state-of-the-art architecture with an industry-leading 68 percent of the body composed of high-strength steel, resulting in a very strong and rigid structure. Combined with responsive steering, four-wheel independent suspension, and available 18-inch wheels, the Dart brings fun back to driving in the compact car segment.

UNMISTAKABLE STYLE
The all-new 2013 Dart marks the Dodge brand’s re-entry into the compact sedan segment, hitting the bulls-eye with a modern, unmistakable Dodge design that builds upon its performance heritage while evoking emotion, efficiency and fluidity of movement.

Eye-catching exterior proportions are set off from every angle by dynamic lines and curves, along with advanced technology, to deliver class-leading aerodynamic performance. The personality-packed front view is instantly recognizable as an all-new Dodge with its tailored split-crosshair grille, projector headlamps and fog lamps and accentuated fenders. Signature Dodge full-width LED ‘racetrack’ tail lamps and class-exclusive integrated dual exhaust – both inspired by Dodge Charger – accentuate the athletic and muscular stance of this dynamic and passionate new design.

MultiAir technology delivers optimum combustion at any speed under all driving conditions by allowing direct and dynamic control of air intake and combustion. The result is up to a 15 percent increase in low engine rpm torque, a 7.5 percent improvement in fuel efficiency and a 10 percent reduction in C02 emissions.

THE ALL-NEW DART – BUILT IN AMERICA
The all-new Dodge Dart will be made in America, at Chrysler Group’s Belvidere Assembly Plant in Belvidere, Ill. The Company is in the process of investing $600 million dollars to support the production of future products,

including the 2013 Dodge Dart. The investment includes the construction of a 638,000 square-foot body shop, as well as the installation of new machinery, tooling and material handling equipment. Work on the expansion began in the summer of 2010 and will be completed this year.

The all-new Dodge Dart has been engineered with great levels of refinement, craftsmanship and engaging driving dynamics. Consumers can follow www.Dodge.com/Dart for additional photos and more information about the all-new 2013 Dodge Dart.

ABOUT THE DODGE BRAND
For nearly 100 years, Dodge has defined passionate and innovative vehicles that stand apart in performance and in style. Building upon its rich heritage of muscle cars, racing technology and ingenious engineering, Dodge offers a full-line of cars, crossovers, minivans and SUVs built for top performance – from power off the line and handling in the corners, to high-quality vehicles that deliver unmatched versatility and excellent fuel efficiency. Only Dodge offers such innovative functionality combined with class-leading performance, exceptional value and distinctive design. With the all-new 2013 Dodge Dart, the all-new Dodge Charger paired with the ZF eight-speed transmission that achieves a class-leading 31 miles per gallon on the highway, the new Durango and the significantly revamped Grand Caravan – inventor of the minivan – Journey, Avenger and iconic Challenger, Dodge now has one of the youngest dealer showrooms in the United States.