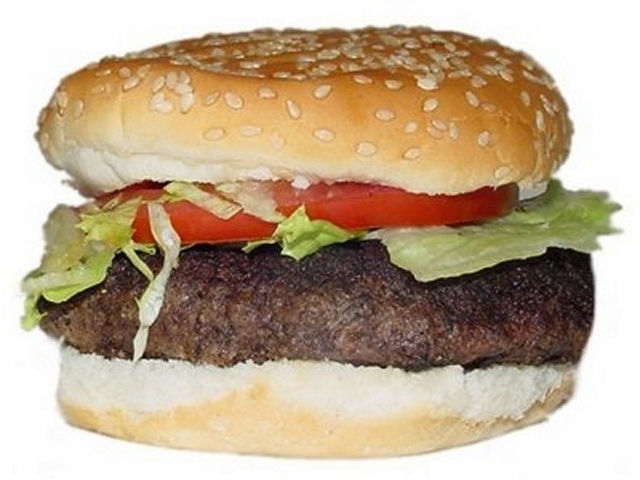 Quick, which is worse for the environment: driving a massive, exhaust-belching diesel-sucking big rig 100 miles or walking into your local burger joint for a delicious angus beef hamburger?

It’s the burger. You monster.

A study from UC Riverside found that the particulate air pollution from a commercial kitchens (that means pretty much any restaurant, from industrial fast food restaurant) cooking charbroiled burgers was worse than pollution from diesel trucks.

How much worse? Here’s what the principal development engineer, Bill Welch has to say:

“For comparison, an 18-wheeler diesel engine truck would have to drive 143 miles on the freeway to put out the same mass of particulates as a single charbroiled hamburger patty.”

Diesel exhaust, which certainly generates its share of airborne unpleasantness, is very well regulated, and many mechanisms are in place to help control it. Charbroiling, however, while releasing plenty of particulates (grease, smoke, heat, water vapor, and combustion products) has almost no regulation in place to control emissions. The study found that these uncontrolled emissions actually are more than twice the output of all heavy-duty diesel trucks, and is the second-largest source of particulate pollution in the South Coast Air Basin.

The researchers aren’t just complaining — they’re currently testing a device that removes grease from the exhaust and traps it in water, and on top of that all the test burgers they cooked up in their research have been donated to local food banks.

Where: CE-CERT test laboratory, Center for Environmental Research and Technology, 1084 Columbia Ave.Riverside, University of California, Riverside. (CE-CERT is two miles away from the main UC Riverside campus.) Directions to CE-CERT.

RIVERSIDE, Calif. – When you think of air pollution, you automatically think of diesel engine fumes, smoke stacks from industrial plants and machine exhaust. You don’t think of a charbroiled hamburger.

Researchers at the University of California, Riverside, however, have found that commercial charbroilers — the same ones that grill hamburgers from your favorite burger joint — emit a large amount of particulate matter into the air we breathe; even more than diesel engines.

“Emissions from commercial charbroilers are a very significant uncontrolled source of particulate matter…more than twice the contribution by all of the heavy-duty diesel trucks,” said Bill Welch, principal development engineer for the study at UC Riverside’s Center for Environmental Research and Technology (CE-Cert). “For comparison, an 18-wheeler diesel-engine truck would have to drive 143 miles on the freeway to put out the same mass of particles as a single charbroiled hamburger patty.”

A proposed control — a device that removes grease from the exhaust and traps it in water — will be tested tomorrow, 1 p.m. to 5 p.m., Sept. 19 at the CE-CERT test laboratory . Researchers will evaluate the air stream released by the commercial charbroiler before and after they pass through the control device and measure how effective it is.

According to Welch, the testing involves “cooking a lot of hamburger patties,” but they don’t go to waste. After the emissions test, the hamburger patties are donated to a Redlands Regional food bank.