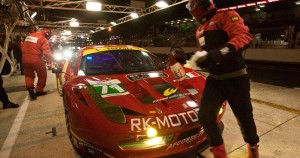 LAS VEGAS – Michael Waltrip Racing owners Rob Kauffman and Michael Waltrip announced today that they will race in the 50th annual Rolex 24 at Daytona on Jan. 26-29. The AF Waltrip entry is a joint project of multiple sports car championship winning AF Corse and Michael Waltrip Racing. Joining the pair behind the wheel of the new Grand Am version of the Ferrari 458 GT will be action sports star and four-time North American rally champion Travis Pastrana and world-renowned road racing veteran Rui Aguas.

“We have been looking at expanding the organization in the sports car world and this is a great next step,” said Kauffman. “The Rolex 24 at Daytona is a world class event with huge historic relevance in motor sports, and bringing a Ferrari to the 50th running is a terrific opportunity. We raced Petit Le Mans and Le Mans itself this year, and plan to increase our presence in North American road racing.”

“My racing career will forever be linked to Daytona, because it was defined on those high banks,” said Waltrip, a two-time Daytona 500 champion. “I’ve raced at Daytona for 25 years and I can’t wait to turn left at the end of pit road and race through the infield for the first time. It will be special to share this experience with Rob, Rui and Travis.”

The AF Waltrip team will be working in close collaboration with the Italy based AF Corse sports car team which fielded Ferraris for Waltrip and Kauffman at the 24 Hours of Le Mans last June. Kauffman previously joined Justin Bell and Aguas in a podium third-place finish at Petit Le Mans at Road Atlanta in October.

“We’re going with every intention on standing on the podium after the 24 hours,” Kauffman said. “Those are pretty high expectations for a very competitive race, but we plan on making this a top notch effort.”

Kauffman, a native New Yorker who lives in London working as the European manager of Fortress Investments, partnered with Waltrip in October 2007. MWR fields Toyota Camrys in the NASCAR Sprint Cup Series from its 140,000-square-foot shop in Cornelius, N.C., for Waltrip, Mark Martin, Clint Bowyer and Martin Truex Jr.

MWR’s participation in international racing events is part of a worldwide business strategy and a way to promote the team on a global stage. In the last year, MWR’s international effort has included visits to Le Mans, the Goodwood Festival of Speed in England, Toyota Motorsports Festival in Japan as well as races and tests in Dubai, Spa, Italy and Portugal.

The 50th Anniversary of the Rolex 24 At Daytona. The famous twice-around-the-clock challenge kicks off the international motorsports calendar, as well as the GRAND-AM Rolex Sports Car Series and features a star-studded line-up of drivers from around the world battling on Daytona’s demanding high-banked road course.