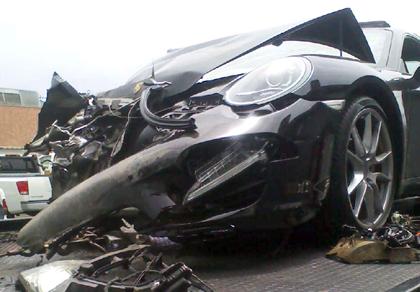 Porsche couldn’t have had a better round of publicity today than Lindsay Lohan’s accident on Pacific Coast Highway in Santa Monica, Calif. Despite a lot of damage to the car, she not only walked away after a brief emergency-room exam, she went back to work on a movie set.

The car appears to be a 911 sports car, and it sustained heavy front-end damage, with most of it on the passenger’s side, judging from photos of the accident. 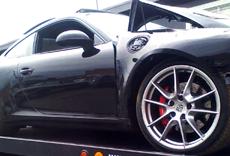 “Particular attention was paid in designing and engineering the junctions of the A-pillars (the struts on either side of the windshield that support the roof) and the roof frame, as well as the safety structure involved in head-on and offset collisions,” Porsche said. The car was designed to transfer those forces around the doors to the rear of the car, skipping the passenger compartment.

In addition, a crossbar at the front of the car is made from high-strength steel to make sure it doesn’t intrude into the footwell area of the passenger compartment.

Lindsay Lohan’s spokesman, Steve Honig, tells Lifeline Live the actress is fine after being involved in a serious car crash on a coastal highway near Los Angeles.

“She is fine and was released less than two hours later and is already headed back to the set (of her Lifetime movie Liz & Dick) to resume work. Fortunately, no one was seriously injured in the accident.” 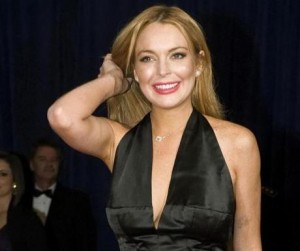 Lindsay Lohan’s spokesman says the actress is fine after being involved in a serious car crash on a coastal highway near Los Angeles.

Steve Honig writes in an email that Lohan was taken to a hospital as a precaution, but was released two hours after the accident happened late Friday morning.

He says the 25-year-old is headed back to work filming a Lifetime movie on the love affair between Elizabeth Taylor and Richard Burton.

Honig says no one was seriously injured in the accident.

Police said Lohan showed no signs of impairment after colliding with a dump truck on a coastal highway near Los Angeles.

Santa Monica Police Sgt. Richard Lewis says both Lohan and the truck’s driver were interviewed after the accident and neither showed signs they were driving under the influence.

Lewis says police continue to investigate fault in the accident, which occurred on the Pacific Coast Highway around 11:40 a.m