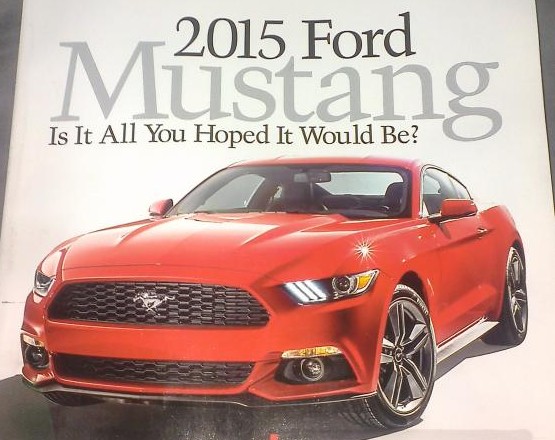 LEAKED PHOTOS OF THE 2015 FORD MUSTANG

We would have to imagine that Ford knew it couldn’t keep its 2015 Ford Mustang under wraps for too long, and with only days to go before the pony car’s official unveiling, the dam seems to be cracking. SVTPerformance.com just posted some images taken of the sixth-gen Mustang prominently featured in and on the cover of the December 9 issue of Autoweek magazine.

The rear view of the new 2015 Ford Mustang might be its best with the ridged, three-bar taillights, a rear diffuser and the lack of a faux gas cap.

These images show that recent renderings we saw weren’t too far off. The face is just like what we saw in spy shots a few months back, but the rear of the car features some of its more striking cues. Starting with the pronounced haunches and hidden B-pillars, the rear view of the new 2015 Ford Mustang might be its best with the ridged, three-bar taillights, a rear diffuser and the lack of a faux gas cap, which allows the galloping pony to be an even more prominent element against the black trim.

The images also reveal a small portion of the updated interior carrying over retro themes like the deep-dish steering wheel and dual-gauge instrument cluster, but it also adds some modern tech with a big infotainment displays and a clean center stack layout. No official word on powertrain or other specs, but while we can’t make out most of the magazine’s text, our eyes did catch mentions of an independent rear suspension and a 200-pound weight reduction.