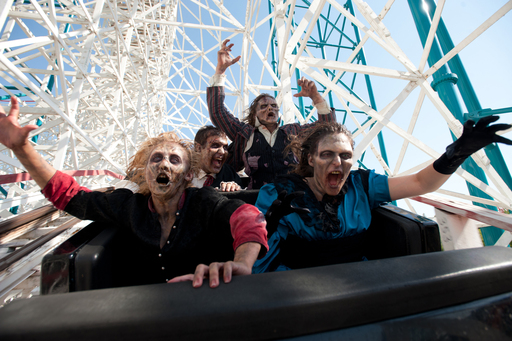 OCTOBER 12-14, 19-21 and 26-28
VALENCIA, Calif. — October 9, 2012 /PRNewswire/ — Six Flags Magic Mountain transforms from a “theme park” to a haunted “scream park” for the 20th season of Fright Fest Presented by SNICKERS®, Southern California’s most thrilling Halloween experience. This season marks one of the biggest and scariest Fright Fest events in the Park’s history with three new mazes, an all new Fright Fest spooktacular production, a completely transformed Festival area and extended park hours Fridays through Sundays in October.

Six Flags Magic Mountain offers nine more days of terrifying haunted mazes, roaming zombies and spooky shows. If that’s not enough, Six Flags Magic Mountain adds a “twisted” element to some of its monster coasters by turning off the lights, leaving riders to face their fears literally in the dark. And, the Fright Fest exclusive that coaster fanatics wait for all year … the transformation of one of the largest, most celebrated coasters in the world, Colossus BACKWARDS! Running every frightfully fun weekend, Fright Fest leaves no tombstone unturned to bring guests the ultimate sensory overload for every range of fear. For the little monsters, a Trick-or-Treat Trail and Halloween crafts round out the activities.

Featuring a completely new interior, along with new terrifying twists and turns,Willoughby’s Resurrected is a reincarnation of the Willoughby family’s beloved haunted mansion that will include more hair-raising horror around each nightmarish turn and down long harrowing hallways. Shrouded in the dark shadows of the nearby Willoughby’s mansion sits another new maze, Black Widow – ground zero for an ever-growing blood-thirsty army of spiders that hunt and haunt at night. Plus, nearby construction has cut the power in the area plunging the new BlackOut maze into total darkness where the panic of pounding hearts will be the only guide through the winding labyrinth.

Back for a second year, one of the largest and most popular mazes in Southern California is The Aftermath, where brave souls enter a post apocalyptic city inhabited by nomad warriors who rule with bone-crushing iron fists and the dead stalk the living. Also returning are Chupacabra, where guests come face to face with this elusive blood-thirsty creature as it terrorizes the local Dia De Los Muertos (Day of the Dead) festival; Cursed, featuring roaming gypsies and werewolves who hunt for fresh blood; Lecter’s Slaughterhouse, a family-run business specializing in tasty human treats; and Jokester’s Hideout 3D, an all black-light hideout where sideshow clowns run amuck.

A new area, Festival Fanta, located next to Apocalypse, features spirited DJs, rockin’ ghouls and a light display guaranteed to add a bit of fright to your night. 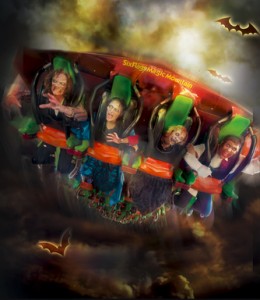 Spooktacular shows include hypnotist Suzy Haner, who puts park guests in compromising scenarios in her hilarious stage show located in Golden Bear Theater; the new Dr. Fright’s Happily Never After, a dark and sexy Halloween song and dance review; Off With Your Head, where Ghoul Rock has gone pop with a musical spectacular sure to entertain; and be sure to dust off your thriller moves and join in the fun as the popular DJ Demonic and gRAVE return for another year in DC UNIVERSE.

Now in its second season, the popular Fright Feast With The Willoughby’s moves to a new location, on top of the hill, next to the new Willoughby’s Resurrected maze. The dinner and show themed attraction features a new menu and new show, guaranteed to entertain the whole family.

Six Flags Magic Mountain 2013 Thrill Passes are now on sale at the lowest prices of the year and provide unlimited visits for the rest of the 2012 season (including Fright Fest) and all of 2013.  For a limited time, with the purchase of four or more Thrill Passes, guests will receive a free upgrade to Gold Thrill Passes which include with every pass, free season parking and a free Hurricane Harbor Season Pass. Plus free tickets for friends and more! Offer expires January 6, 2013.