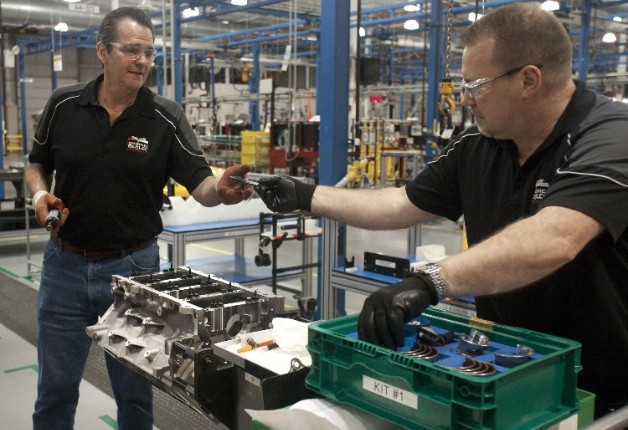 A lot has happened in the last 56 years… mankind landed on the moon, the Cold War ended and General Motors managed to build 100 million small-block V8 engines.

First launched in 1955 with 265 cubic inches of displacement, the small block V8 has seen duty in nearly every memorable machine produced by Chevrolet in the last five decades. In addition to being the bread-and-butter engine in GM’s bread-and-butter brand, the small block has also been widely seen in the engine bays of various Pontiac, Oldsmobile, Buick, GMCand Cadillac models in the States, as well as in Vauxhalls in the UK, Opels in the rest of Europe and Holdens in Australia.

While the current fourth-generation small-black V8 engine from GM doesn’t share much at all in common with its forebears, it’s still a tribute to a solid basic design architecture (4.4-inch bore centers, eight cylinders and overhead valves) that has remained a stalwart in power, affordability and efficiency.

The actual 100,000,000 engine will be a supercharged LS9 V8 that would normally be found in the engine bay of a Chevy Corvette ZR1, but this milestone powerplant will be kept and preserved by GM as part of its historical collection. Fittingly, the LS9, with 638 horsepower, is the most powerful engine ever offered by the automaker in a production vehicle.

In related news, GM has announced that its fifth-generation small block, due in the “near future” (perhaps the C7 Corvette?), will be blessed with a new direct-injection combustion system for enhanced efficiency. Naturally, it will still have 4.4-inch bore centers.

There’s plenty of cool statistical information in the press release and video after the break, so we suggest you check it out for yourself… especially if you belong to the camp that believes pushrods automatically equal antiquated technology.

Chevrolet introduced the small-block in 1955 and the production milestone comes in the same month the brand marked its 100th anniversary. The small-block engine has been used in GM vehicles around the world and is currently found in global Chevrolet, GMC and Cadillac vehicles, as well as Vauxhall in the United Kingdom and Holden in Australia.

“The small block is the engine that brought high-performance to the people,” said David Cole, founder and emeritus chairman of Center for Automotive Research – and whose father, the late Ed Cole, was the chief engineer at Chevrolet and oversaw development of the original small block engine. “There is an elegant simplicity in its design that made it instantly great when new and enables it to thrive almost six decades later.”

The milestone engine is a 638-horsepower supercharged LS9 small block – the power behind the 205-mph Corvette ZR1 – which is hand-built at GM’s Performance Build Center, northwest of Detroit. It represents the fourth generation of the small block and is the most powerful engine ever built by GM for a regular-production car. GM will preserve the engine as part of its historical collection.

The small block has been adapted in almost innumerable ways throughout the auto industry and beyond. Updated versions of the original Gen I engine are still in production for marine and industrial applications, while “crate engine” versions offered by Chevrolet Performance are used by thousands of enthusiasts every year to build hot rods. The 4.3L V-6 used in some Chevrolet and GMC full-size trucks and vans is based on the small-block, too, but with two fewer cylinders. All of these versions contribute to the small block’s 100-million production milestone.

“This tremendous achievement celebrates an engineering triumph that has reached around the globe and created an industrial icon,” said Sam Winegarden, executive director and group global functional leader – Engine Engineering. “And while the small-block’s enduring design has proven adaptable to meet performance, emissions and refinement challenges over the years, it has more importantly delivered them with greater efficiency.”

Current small blocks engines feature all-aluminum cylinder block and heads in car and many truck applications to help save weight and contribute to greater fuel economy. Many applications feature fuel-saving technologies such as Active Fuel Management – which shuts down four cylinders in certain light-load driving conditions – and camshaft phasing, which continuously alters valve timing to optimize performance, efficiency and emissions.

The 430-horsepower (476 kW) LS3 version of the Gen-IV small-block helps the 2012 Corvette accelerate from 0 to 60 mph in about four seconds, run the quarter-mile in just over 12 seconds and achieve a top speed of more than 180 mph – all while achieving EPA-estimated highway fuel economy of 26 mpg. That compares favorably against many sports and performance cars:

GM also announced Tuesday that the fifth-generation small-block under development will feature a new direct-injection combustion system that will help enhance efficiency over the current-generation engine.

“The small-block architecture has continued to prove its relevance in a fast-evolving industry and the fifth-generation engine will build on the performance legacy with a significant advance in efficiency,” said Winegarden.

GM is investing more than $1 billion in manufacturing facilities associated with producing new small-block engines, resulting in 1,711 jobs that have been created or retained. The Gen V engine is expected in the near future and is guaranteed to have 4.4-inch bore centers – the center-to-center distance between cylinders that has been part of the small-block’s architecture from the beginning.

GM didn’t invent the V-8 engine, but interpreted it in a way that made performance accessible to millions of new customers. It got its start in the years following World War II, after Chief Engineer Ed Cole transferred to Chevrolet from Cadillac, where he oversaw the development of its premium V-8 engine.

Cole’s team retained the basic overhead valve design that was a staple of Chevrolet’s inline-six engine – affectionately called the Stovebolt. It was seen as one of the Chevrolet car line’s selling points, reinforcing a message of simplicity and reliability. Cole challenged his engineers to tighten the new engine package to make it more compact, less costly and easier to manufacture.

Upon its debut in the 1955 Chevy lineup, the new V-8 engine was physically smaller, 50 pounds lighter and more powerful than the Stovebolt six. It was not only a better engine for Chevrolet cars, it represented a better way of building engines, with a minimalist design that took advantage of streamlined production techniques.

After only two years on the market, the small-block began a steady march upward in displacement, power and technological advancement. In 1957, a version equipped with mechanical fuel injection was introduced, dubbed Ramjet. The only other high-volume manufacturer to offer fuel injection at the time was Mercedes-Benz.

The small-block’s 4.4-inch bore centers – the distance from the center of one cylinder to the next – would come to symbolize the compact, balanced performance of the small-block. It was the dimension around which the Gen III small-block was designed in 1997. In 2011, the small-block is in its fourth generation, powering Chevrolet’s full-size trucks, SUVs and vans, midsize trucks and the Camaro and Corvette performance cars.

General Motors Co. (NYSE:GM, TSX: GMM) and its partners produce vehicles in 30 countries, and the company has leadership positions in the world’s largest and fastest-growing automotive markets. GM’s brands include Chevrolet and Cadillac, as well as Baojun, Buick, GMC, Holden, Isuzu, Jiefang, Opel, Vauxhall and Wuling. More information on the company and its subsidiaries, including OnStar, a global leader in vehicle safety, security and information services, can be found at http://www.gm.com.