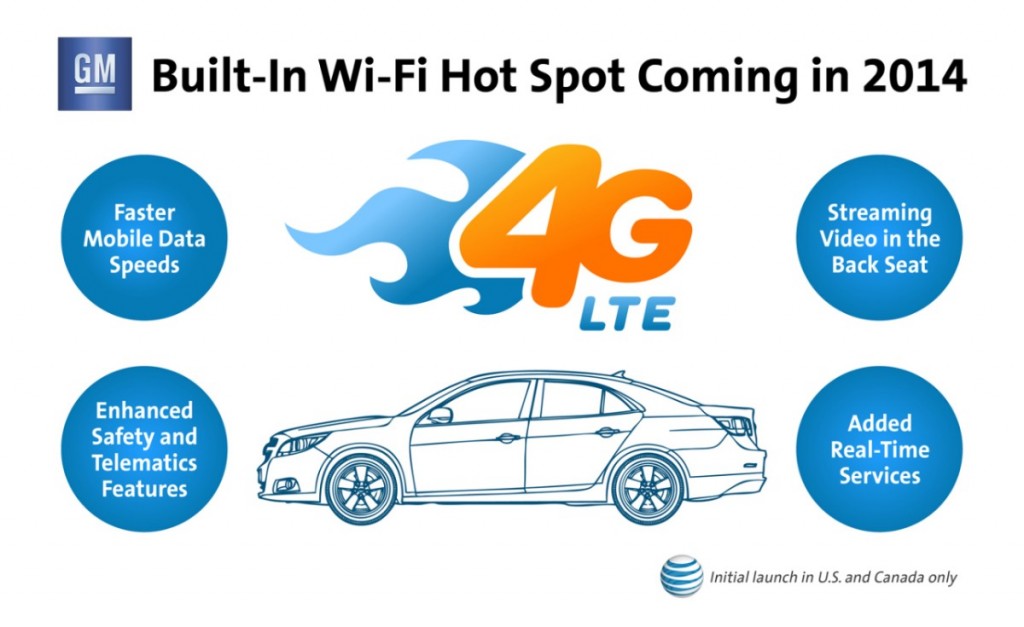 Collaboration with AT&T begins with U.S. and Canada rollout in 2014

The first GM cars, trucks and crossovers to get 4G LTE will be most 2015 Chevrolet, Buick, GMC and Cadillac models available in 2014 in the United States and Canada delivered through AT&T. GM will announce more carrier and supplier relationships in coming months to expand 4G LTE capabilities in markets around the globe.

With mobile data speeds up to 10 times faster than 3G technologies, increased responsiveness, and the ability to support simultaneous voice and data connections, a built-in 4G LTE connection will enable advances in a wide range of in-vehicle communications and entertainment capabilities. Expected benefits for GM customers could include in-vehicle Wi-Fi hot spots, new infotainment options like streaming video entertainment in the back seat, real-time updates and faster application downloads. These enhancements build on OnStar’s existing portfolio of built-in connected services, first introduced in GM vehicles in 1996.

The built-in 4G LTE structure is specifically designed for in-vehicle use as it is integrated into the vehicle’s electrical system and includes an external antenna to maximize coverage and connectivity. Customers will not be required to have a smartphone to use connected services.

“In addition to allowing consumers to bring in and connect to personal mobile devices, the vehicle will also act as its own mobile device, enabling embedded vehicle capabilities,” said Mary Chan, president, Global Connected Consumer, General Motors.  “Turning this vision into a reality starts with enabling fast, reliable and responsive connectivity within the vehicle.  Through this built-in 4G LTE connection we have the opportunity to reinvent the mobile experience inside a vehicle.”

Over time, applications of widespread in-vehicle 4G LTE connectivity will enable vehicles to interact directly with their environment to enhance safety, efficiency and convenience for drivers and passengers. 4G LTE will make services such as real-time traffic and navigation updates possible, pulling information from the cloud.

GM and AT&T will immediately begin work to develop 4G LTE connectivity for GM vehicles in the U.S. and Canada.  AT&T’s 4G LTE network is expected to reach 300 million people in the U.S. by the end of 2014, and its network performance and deployment strategy have been lauded by industry analysts and other experts.

GM and AT&T will also work together on a broad ecosystem focused on developing new communication applications to enhance the driving and riding experience.

Both GM and AT&T are leading innovators in their industries.

GM received more U.S. patents in 2012 than any other automaker as it continued to drive advances in performance, efficiency, sustainability and in-vehicle infotainment. GM’s OnStar enabled the world’s first connected vehicles 16 years ago, and delivers industry-leading capabilities, ranging from stolen vehicle assistance to voice navigation and live advisor support.

“As we implement 4G LTE connectivity into our vehicles the most important piece we will consider is delivering this technology to our customers in a safe manner, staying focused on reducing any related distractions,” said Chan.

AT&T maintains a long heritage of innovation at AT&T Labs. The company’s hands-on work with the developer community, centered in its AT&T Foundry facilities, has resulted in numerous innovations in mobile apps and network technology.

The widespread integration of 4G LTE into GM vehicles will enhance GM’s recently announced application framework and third-party developers program.  In January, GM introduced a new set of vehicle application programming interfaces (APIs), which enable developers to build on GM vehicles’ infotainment systems, as well as a new flexible application framework that will allow drivers to add apps and infotainment features to their vehicles after purchase.

“Our commitment to 4G LTE strengthens our ability to collaboratively innovate with developer partners,” said Chan.  “Developers will be able to take full advantage of 4G LTE speeds as they design vehicle-specific apps, and they can pursue development knowing that they’ll have a broad base of potential customers as connectivity is built-in across GM brands and regions.”

As 4G LTE networks expand globally, GM plans to work with additional carrier partners to enable connectivity in other brands such as Opel and Vauxhall.  Additional details on availability and service options will be announced later.