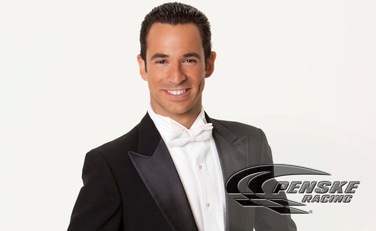 MOORESVILLE, N.C. (July 27, 2012) – Penske Racing is excited to announce that three-time Indianapolis 500 winner Helio Castroneves has been selected to participate in ABC’s upcoming season of “Dancing with the Stars: All-Stars.” The new season will begin in September and has been billed as an all-star season to include former season champions and fan favorites.

Castroneves won Season Five of “Dancing with the Stars” in 2007 with professional dance partner Julianne Hough, as the Team Penske driver defeated former Spice Girls member Melanie Brown in the finale. Using a memorable yellow suit and Brazilian flair, Castroneves captured the surprising victory as he wowed the millions of fans of the popular show with both his moves and his infectious personality.In his 13th year with Team Penske in 2012, Castroneves is enjoying one of his best seasons on the race track as he battles for the IZOD IndyCar Series championship. Through 11 races, Castroneves is ranked second in the point standings after earning a victory at Edmonton last weekend. In addition to his two race wins in 2012, Castroneves took the pole position at Barber Motorsports Park and has finished in the top-10 in nine of 11 races driving the No. 3 Shell-Pennzoil/AAA Insurance/Penske Truck Rental Dallara/Chevrolet. Over his illustrious career, Castroneves has earned 27 victories, 37 pole positions and his 4,729 career laps led leads all active IndyCar drivers.”I am so excited to return to ‘Dancing with the Stars,'” said Castroneves, who was in Hollywood for today’s announcement of the show’s new fall season. “Winning the ‘Mirror Ball’ trophy was an unbelievable experience and I’m very honored that the show has asked me back to compete again this season. I know it’s going to be a lot of hard work, but also a lot of fun. I can’t wait to start dancing again!”Penske Racing is one of the most successful teams in the history of professional sports. Competing in a variety of disciplines, cars owned and prepared by Penske Racing have produced 360 major race wins, 419 pole positions and 23 National Championships. The team has also earned 15 Indianapolis 500 victories. For more information about Penske Racing, please visit www.penskeracing.com.