Cadillac has pulled the wraps off of its newest family member, the long-rumored, Voltec-powered, eye-catching extended range hybrid coupe called the ELR. The car makes use of the same basic architecture as the Chevrolet Volt, but has been thoroughly layered on with design, technology and performance tuning – with the goal of being a properly situated product for the Cadillac brand. 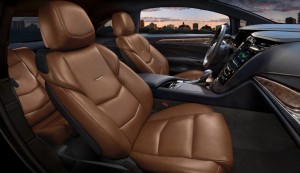 In terms of styling, inside and out, the ELR hits the ball out of the park. Designers set an aggressive goal of staying as true as possible to the original Converj show car from 2009. The resulting vehicle is, frankly, as sexy a Cadillac as can be found on the road today. A low, fast roofline is handsomely accented by the ELR’s strong shoulder line, while the stance is super aggressive thanks to monstrous 20-inch wheels pushed out to the extreme corners of the car. Exterior trim is wrought in either satin chrome or a very subtle black satin chrome (the dark panels inside the egg crate grille wear this finish, as does the outermost frame of the headlights).

All exterior lighting (and interior lighting, for that matter) is by way of LED units, with some pretty cool detailing to be found the closer you look. The taillights are made up of two LED strips, both of which light up during braking, while the outside-most element alone repeats when a turn is indicated. The sideview mirrors also carry LED indicators, though the driver’s side light doubles as a state-of-charge meter when the ELR is plugged in. 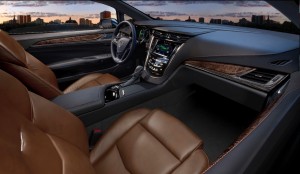 The new Cadillac’s interior is every bit the measure of its exterior styling, and rather lavish. (It’s fair to point out that the interior prototype we saw was still not 100-percent approved for production, but we were told that it is very close.) The cockpit is as leather-bound as anything we’ve seen this side of a Bentley, with the ELR wearing cowhide in virtually every standard “soft-touch” area. Our tour guides were hot to point out that such normally forgotten-about places as the entire surround of the instrument panel, the horn pad and the door panels – all the way to the floor – have been leather-bound.

The in-cabin technology seems impressive, as well, with Cadillac’s CUE system running the show, a malleable digital instrument panel informing the driver of near-countless datum and a 10-speaker Bose system with noise cancellation (in an electric car!) providing the soundtrack. ELR even boasts an industry-first (as far as we know) “power-assisted” sliding cupholder cover… we kid you not.

In terms of performance, the front-wheel-drive ELR is likely to be a bit subtler in its entertainment value than rear-drive fun machines like the Cadillac ATS and V Series vehicles. Total system output maxes at 207 horsepower (154 kW) and 295 pound-feet of peak torque, which should offer adequate, if not stirring, get-up-and-go for the 4,070-pound coupe. Cadillac is claiming a much more enthusiastic driving character for the ELR, still, based a lot on a stiffer body structure, and an available sport program that alters throttle response, steering effort and damper settings. The ELR also has a “Regen on Demand” feature where, by using steering-wheel mounted paddles, the driver can temporarily increase the regenerative braking level to mimic the effect of a downshift – as if the ELR had a traditional transmission. Of course, the ELR is anything but traditional.

The lithium-ion battery pack is refined (read: a bit lighter) versus the Volt’s unit, though basically the same, and the ELR has the same 1.4-liter gasoline engine for use as a range-extender, as well. Total electric-only range for the car is estimated at 35 miles (the Volt gets 37); recharging takes about 12 hours on a 120v charger, and about 4.5 hours on a 240v charging station.

“ELR is an unprecedented combination of luxury, advanced engineering and progressive design in a coupe that is both sporty and environmentally friendly,” said Bob Ferguson, Cadillac global vice president. “This is a pivotal moment in Cadillac’s history, as we continue our product-driven expansion.”

The ELR delivers on the promise of the Converj Concept on which it is based. The exterior establishes a new, progressive proportion for the brand while the interior introduces a new design theme that will define future Cadillac models, emphasizing modern elegance, technology and precisely crafted details.

“ELR marks a fresh, even surprising new dimension of Cadillac,” Ferguson said. “An additional aspect of ELR’s appeal to will be exclusivity. It will be a specialized offering produced in limited numbers.”

ELR’s confident and responsive EREV driving technology is enhanced with exclusive Regen on Demand and selectable drive modes that enhance driving and make the most of efficiency. Regen on Demand allows the driver to temporarily regenerate energy from the ELR’s momentum into electricity that can be stored in the battery pack for later use. It is engaged via steering-wheel paddles adapted from traditional performance cars.

The industry-leading, proven EREV technology is uniquely tuned for Cadillac in the ELR. Most daily commutes will require zero gasoline with zero emissions. Longer trips are free from electric-vehicle range anxiety because EREV technology enables the same long-distance freedom as a conventional car.

ELR production begins in the United States in late 2013 with sales starting in early 2014 in North America and expanding to global markets including China and Europe.

Design
The Cadillac ELR has an aggressive, forward-leaning profile that introduces a new, progressive theme and proportion in Cadillac’s design evolution. It carries over almost unchanged from the 2009 Converj concept that inspired it. The overall shape is reinforced by a prominent, sweeping body line accented by 20-inch wheels pushed to the edges of the body.

Vertical headlamp and taillamp elements create Cadillac’s signature for the ELR, day or night and from the front or rear – a brand tradition since 1948.

Aerodynamics play a crucial role in the design as airflow is managed to help the vehicle slip through the air with minimal drag. A flush front fascia and grille – with active shutters behind the grille opening – as well as tapered fascia corners, enable air to move easily around the car to reduce drag. In the rear, sharp edges and a carefully designed spoiler also manage airflow. An aggressive rake on the windshield and back glass help reduce turbulence and drag and contribute to ELR’s 0.305 coefficient of drag.

Cadillac CUE with Navigation is standard and accessible through a large, eight-inch, full-color capacitive-touch screen in the center of the instrument panel. It supports the electrified driving experience with displays on driving efficiency, energy usage, charging options and more, in addition to a broad range of infotainment options.

Using Cadillac CUE via the touch screen features gesture recognition, proximity sensing (revealing information when needed) and a three-core microprocessor for faster response. Some features are accessible via steering-wheel controls and the motorized screen pivots up to reveal a hidden storage compartment with a USB port for phones and other personal items.

Driving Experience
The Cadillac ELR’s dramatic design is matched with an engaging driving experience, supported by the EREV propulsion system calibrated for uncompromising performance. With 295 lb.-ft. of torque (400 Nm) – about 12 percent more than the 3.6L V-6 in the SRX – acceleration in the city and on the highway, including merging and passing, is achieved with reassuring power on demand.

Because the ELR operates so quietly in all-electric mode, a driver-activated feature sounds a noise to alert pedestrians, particularly those with visual impairments, in an intersection. The alert was developed in conjunction with the American Federation of the Blind.

The ELR’s battery is a T-shaped, 16.5 kWh lithium-ion battery pack, located along the centerline of the vehicle, between the front and rear wheels for optimal weight distribution. The 5.5-foot-long (1.6 m), 435-pound (198 kg) pack supplies energy to an advanced electric drive unit capable of 295 lb.-ft. of instant torque (400 Nm) to propel the vehicle. Using only the energy stored in the battery, the ELR will deliver a GM-estimated range of about 35 miles (56 km) of pure electric driving, depending on terrain, driving techniques and temperature.

A driver-selectable Hold mode directs when the ELR uses its electric generator. This feature helps optimize the electric-driving experience, allowing owners who mix city and highway driving to save the battery charge for city travel, where the ELR EV mode operates most efficiently.

Charging the ELR’s battery can be done with a 120V electrical outlet or a dedicated 240V charging station. The vehicle can be completely recharged in about 4.5 hours using a 240V outlet, depending on the outside temperature.

Once the vehicle is plugged in, owners can schedule either immediate or delayed charges, even coordinating charging according to departure time or when electricity rates are lower. Owners also can manage and monitor the ELR online or with their smartphone and RemoteLink, a mobile app powered by OnStar.

Manufacturing
The Cadillac ELR will be manufactured at General Motors’ Detroit-Hamtramck Assembly Plant, the world’s only automotive manufacturing facility that mass-produces extended-range electric vehicles for global markets in 21 countries. It is also home to Southeast Michigan’s largest photovoltaic solar array. The 264,000-square-foot feature generates up to 516 kilowatts of electricity – enough to charge 150 ELRs per day.