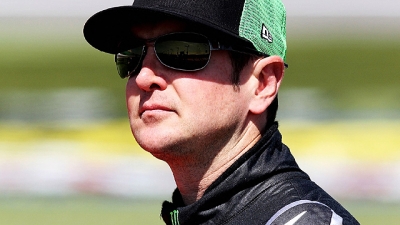 Phoenix Racing team owner James Finch announced Tuesday that driver Kurt Busch will remain with the team after serving a one-race suspension last week for an angry encounter with a reporter at Dover a week earlier.

Busch and Finch met Tuesday morning to discuss their situation. Afterward, Phoenix Racing released the following statement attributed to Finch, which read: “We have met with Kurt. At the end of the day, we are racers, so we’re going racing together with Kurt and the No. 51 Phoenix Racing Chevrolet.

We know adjustments have to be made but how we fix that is between Kurt and myself.

We’re going to go to the track, work hard, race hard and work on trying to attract a sponsor – and we’re going to do that together.”

Busch and Penske Racing, his home since 2006, parted ways at the end of 2011 following Busch’s obscenity-laced tirade against an ESPN reporter at the season-ending race at Homestead-Miami Speedway.

By that point, all the top NASCAR Sprint Cup seats for 2012 already were spoken for, so Busch signed with Phoenix Racing, a small, one-car team with only about 15 employees. While team owner Finch has been able to buy competitive cars and engines from Hendrick Motorsports, Phoenix Racing has only a fraction of the resources of Busch’s former teams, Penske and Roush Fenway Racing.

It was expected that Busch would be one and done with Phoenix in 2012, the idea being that if he kept his nose clean, he’d move back to a higher-tier team in 2013.

Finch and Phoenix have the reputation of a hard-working, hard-partying team, while Busch is extremely passionate and occasionally volatile. The two had a handshake deal to work together this season, with Finch joking that their arrangement was, “He can’t quit and I can’t fire him.”

But Busch was put on probation and fined $50,000 by NASCAR after an incident in the Bojangles’ Southern 500, when after the race, Busch ran into the back of Ryan Newman’s car on pit road. Busch and members of Newman’s crew exchanged words after the incident, which Busch said occurred because he was taking his helmet off and didn’t see Newman’s car.

Then, at Dover International Speedway, Sporting News reporter Bob Pockrass attempted to ask Busch if being on probation affected how he raced Justin Allgaier in the NASCAR Nationwide Series race, where the two drivers had contact on the track and an animated discussion afterward.

That earned Busch a one-week suspension and put his future in doubt with Phoenix, but he and Finch will remain together, at least for now. The team still needs to find additional sponsorship for the rest of the season, a critical need in a very expensive sport.