Gas prices may be on the rise but one biker doesn’t need gasoline to fill his tank….instead of bringing home the bacon, he is using the bacon to bring him  home. One of America’s favorite breakfast meats is being used to fuel a motorcycle made by food company -Hormel. The new-aged fuel is made from bacon grease which comes from Hormel’s Illinois Food Plant. The grease is taken to Wisconsin where it’s turned into bio fuel. The average tank of bacon grease fuel runs at about $3.50 a gallon, but the bike gets 75 to a 100 miles to the gallon. “The whole goal was to really find people that are to the core about something, we’re obviously bacon to the core, but finding people that have a passion or have something they really believe in,” said Scott Schraufnagel of BBDO ADVERTISING. The bacon-fueled bike recently set out on its first trip, traveling all the way from Austin, Minnesota to San Diego. 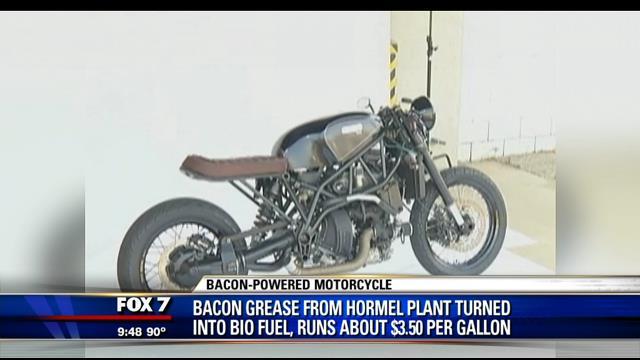