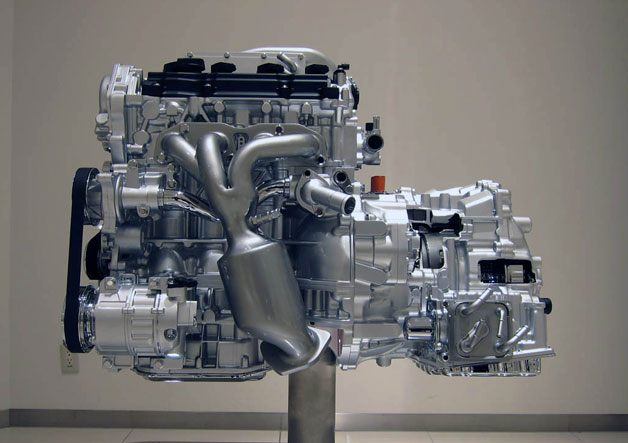 Every automaker is intent on downsizing its engines and adding some kind of hybrid component to its vehicles, and Nissan is no different. Today in Japan, Nissan introduced its latest in-house-developed hybrid drive system, comprised of a 2.5-liter four-cylinder engine and a compact lithium-ion battery pack. But here’s the kicker: it’s packing a twin-screw supercharger on top.

According to engineers we spoke with, that means the same output as Nissan’s tried-and-true 3.5-liter V6 – somewhere in the neighborhood of 260 horsepower and 250 pound-feet of torque – all while returning fuel economy improvements of up to 10 percent when mated to Nissan’s all-new continuously variable transmission (expect more on that later).

Engineers claim that the torque curve of the new supercharged mill is nearly identical to the V6 and that power delivery will be just as seamless as the 3.5-liter. Officially, Nissan says that a model packing the new engine is due to arrive in 2013 in North America, and it’s safe to assume that’s going to be the next-generation Altima.

Nissan reps confirmed that the combination of superchargers and hybrids will proliferate throughout the automaker’s lineup in the coming years, and that’s sure to extend to Infiniti, as well. That last bit has us pontificating that the mystery mid-engine Infiniti concept coming to the Geneva Motor Show could be packing a variant of this same mill, but augmented with plug-in tech.