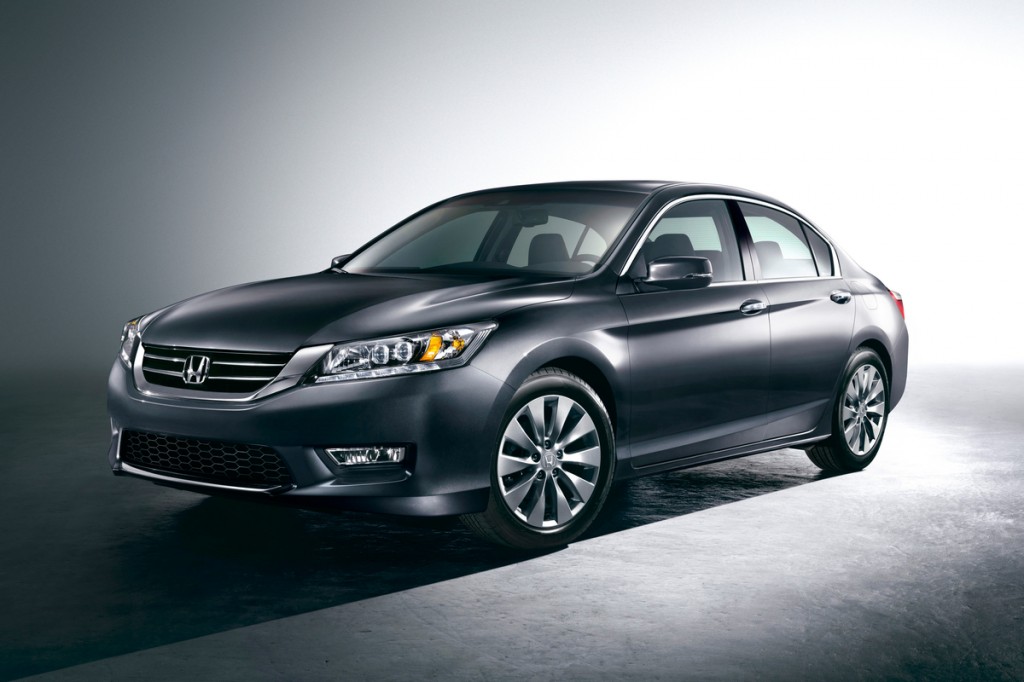 According to Honda, what you’re looking at here is “the most sculpted Accord ever.” The camouflage has been pulled away and we’re now getting our first glimpse at the production 2013 Accord sedan.Historically, Honda has never been known to break design barriers with its decidedly likable midsize sedan. But when you’re competing with the likes of the best-selling Toyota Camry in one of the most competitive and highly shopped segments in the industry, sex doesn’t always sell. And to that extent, yes, this is the most sculpted Accord we’ve seen – certainly more attractive than the current sedan – but it won’t set the world on fire.
And that’s fine, because conservative, handsome styling sells, as evidenced by Volkswagen’s recent sale surge with the redesigned Jetta and Passat.Conservative and handsome it definitely is. We like the strong character line that sweeps along the belt line and fades off just before the C pillar, and elements like the attractive 10-spoke wheels, LED running lamps, headlamps and taillamps keep it looking modern. From the rear, we won’t fault you for mistaking the Accord for a Hyundai Genesis, and we’ll really have to see the car in person before making final design judgments. It’s not Sonata sleek, but it certainly doesn’t look bad.Honda does say that the 2013 Accord sedan is “bigger on the inside and smaller on the outside.” We’ll have more details when the car officially debuts in the fall.

Overall, it looks more like an evolution than a major change.  Hopefully, Honda will upgrade the interiors to better compete with Camry and Sonata.

Honda today revealed the first images of the much anticipated all-new 2013 Honda Accord Sedan and Accord Coupe, set to go on sale this fall. The most sculpted Accord ever delivers an even more spacious and luxurious passenger cabin wrapped in an upscale, sophisticated exterior designed to stand the test of time.

The 2013 Accord’s styling is expressive, sophisticated and premium. Starting in the front, a bold new grille imparts a distinctive and dynamic tension that complements the powerful look of the hood’s multiple styling lines. A strong side character line flows through the door handles and flares upward toward the rear of the vehicle to further convey a sense of motion. A deep contour in the rocker panel firmly grounds its visual presence to the road and smartly turns upward to convey a sporty attitude. In the back, the inward slope where the fenders taper into the trunk and C-pillars is designed to convey a powerful, athletic stance from the rear.

True to the spirit of Honda and every Accord before it, the ninth-generation embraces a customer focus from the inside out. Smart interior packaging allows for increased passenger and cargo space in both the sedan and the coupe, while the overall exterior lengths are noticeably shortened, contributing to a sportier driving character and easier parking. An expansive greenhouse and generous rear seating area provide excellent levels of visibility and comfort for the driver and all passengers.

“This car is the most sculpted and the most dynamic Accord yet,” said Vicki Poponi, assistant vice president of product planning for American Honda. “Following Honda’s long-held philosophy of ‘man maximum, machine minimum,’ the beautiful exterior evolved from a focus on interior space and the needs of the people inside it.”

More information about the all-new 2013 Accord will be revealed later this fall. For photos about the styling direction of the 2013 Accord, visit www.hondanews.com.