Chevrolet has pulled the wraps off of a hotter version of its Sonic. The 2013 Sonic RS is headed for an international debut at the 2012 Detroit Auto Show next month, and onlookers can expect to see the hatch with the same 1.4-liter turbocharged four-cylinder engine found in uplevel Sonics, tuned to yield 138 horsepower and 148 pound-feet of torque.The RS also brings along a few exterior treatments, including a new front and rear fascia, rear spoiler, side sills and five-spoke alloy wheels.

More importantly, the 2013 Chevrolet Sonic RS packs a lower, stiffer suspension for improved handling.General Motors isn’t saying just how much lower or stiffer the pieces are over the base Sonic, which leads us to believe the changes aren’t large enough to raise any eyebrows.

Inside, the Sonic RS features sport seats and a sport steering wheel along with aluminum sport pedals and a new gauge cluster treatment. So far, there’s no word on how much the Sonic RS will cost. We have included the full press release below.  Enjoy! 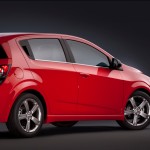 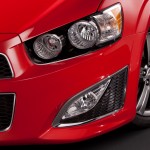 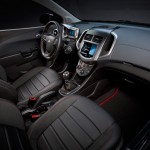 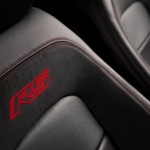 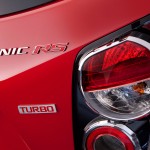 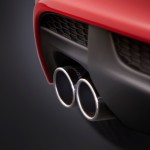 DETROIT – A hotter Chevrolet Sonic is about to sound off – the 2013 Sonic RS. It goes on sale in late 2012, after making its public debut at the North American International Auto Show Jan. 14-22.

The new RS amplifies the Sonic’s youthful style and driving experience with unique exterior and interior features matched with a 138-horsepower (103 kW) Ecotec 1.4L turbo engine. Sonic is the only vehicle in its segment to offer a turbocharged powertrain.

“The new Chevrolet Sonic RS pushes Chevrolet’s performance heritage in a new direction, for a new generation of drivers,” said Chris Perry, vice president of Global Chevrolet Marketing. “It takes the Sonic’s great design and latest connectivity features and combines them with a more performance-oriented look and feel.”

The Sonic RS is offered exclusively in the five-door body style. Chevrolet’s exclusive MyLink infotainment system is standard. It enables navigation directions downloaded through a smart phone to be shown on the radio’s large display, and offers the personalized connectivity of Pandora and Stitcher Internet radio.

The more-aggressive look of the Sonic RS is inspired by the concept that debuted in Detroit in 2010. The Sonic RS will be available in Victory Red, Summit White, Cyber Gray Metallic and Black Granite Metallic, which is a new exterior color for the 2013 Sonic.

“The Sonic RS remains true to the progressive spirit of the concept and brings an unmistakable attitude to the segment,” said John Mack, design director for the Sonic. “From every angle and every touch point, it is a car that is unabashed in its performance statement – and one that drives Chevrolet’s performance legacy into its second century.”

One of the most-dramatic cues from the concept carried into the production model is the Sonic RS’s front fascia, which has a deep air dam design that enhances the car’s road-hugging stance. Vertical intakes at the edges of the fascia reinforce the wide, low proportion and house the fog lamps.

“Like the exterior, the Sonic RS’s interior looks and feels the part of a true performance car,” said Mack. “The seats are firm and provide great lateral support during quick cornering and the feel of the thick, flat-bottom steering wheel is a feature driving enthusiasts will truly appreciate.”

The Sonic RS’s interior is a connected environment, with the Chevrolet MyLink infotainment seven-inch color touch screen radio. This system allows customers to bring customized music libraries into the vehicle and use their smart phones and Bluetooth connectivity to access Pandora and Stitcher Internet radio and navigation. Navigation directions downloaded through a smart phone can be displayed on the screen and, when the vehicle is stopped, users can project video and even personal photo albums onto the screen from their phone.

The Sonic RS is powered by a standard Ecotec 1.4L turbo engine that is rated at 138 horsepower (103 kW) and 148 lb.-ft. of torque (200 Nm) – and provides an immediate feeling of power that is sustained across the rpm band, for a greater feeling of performance at lower rpm. It’s matched with a six-speed manual transmission or six-speed automatic.

Unique gear ratios for the six-speed manual transmission and unique final drive ratio for the automatic give the Sonic RS a sportier feel than non-RS models.

The new RS is the only Sonic model offered with four-wheel disc brakes, which are partnered with a four-channel anti-lock braking system. The four-sensor system – one at each wheel – incorporates electronic brake force distribution, which balances braking performance based on such factors as road conditions and the weight of passengers and/or cargo.

Electric power steering is standard and features a wear compensator that continually adjusts the system interaction with the steering gear to ensure precise steering action over the life of the system.

Sonic lineup at a glance

The Chevrolet Sonic is offered in two body styles: a four-door sedan and a five-door, with a starting price of $14,495 (including destination charge). Each body style delivers class-leading, rear-seat roominess and cargo space. Vehicle highlights include:

Sedan offers trunk capacity that is greater than most compact cars; hatchback and sedan offer better rear-seat roominess than Ford Fiesta. With a rear seat that folds nearly flat, the Sonic hatchback has greater cargo capacity than Fiesta

Remote start, heated front seats and sunroof – all rarities in the segment

Sonic is built at the General Motors’ Orion Assembly Center in Michigan, which received a $545-million investment in upgrades and retooling and helped restore approximately 1,000 jobs in the metropolitan Detroit area.